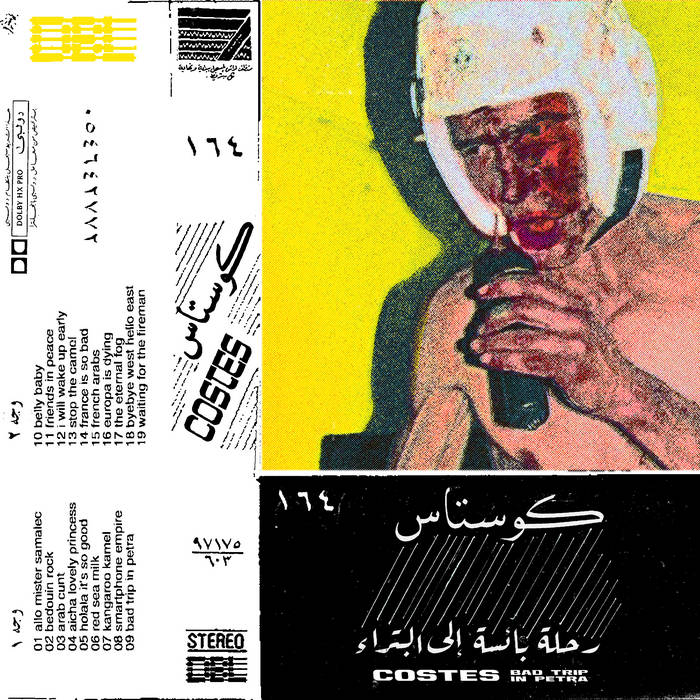 Even with a scene more complex and open for anyone to fit in today, Jean-Louis Costes, a true outsider gem, still gets bottles thrown on his face when he’s on stage. Being one of the first punk-DIY French artists, self-releasing dozens of tapes and CDs from the early 1980s till this very day, Costes’ heroic discography is surprisingly rich and outlandish, melding experimental, spoken word, electronics, sometimes hip-hop or metal, and often parodying the French variety. In this release, Jean-Louis offers 19 treasured tracks of what is honorably Drowned By Locals’ first release; Bad Trip In Petra, narrating his imaginary trip to Jordan.

"Costes says in one interview, “Every performance is intense, very physical. But be careful not to confuse it with reality. It is just theatre—the sex, physiology, aggression—everything is being played, not, how should I put it, ‘lived’.” We could look at “Bad Trip in Petra” from the same angle: it is a comprehensive album, containing nineteen interconnected tracks, forming as a whole an interlaced, intense, and very physical auditory-musical-narrative performance, but it is not exactly the lived reality. It is rather the distorted-confused representation of said reality, produced by magnifying faults and issues, crossing for that cause through many taboos and politically correct notions, to take us to a place where fog reigns singlehandedly in this modern world of ours, fog that blocks sight, fog that is the endless truth, and there is no way to reach it except by discarding the primary means of vision. On the seventeenth track, “the eternal fog”, a man asks of the right path. He gets the answer that truth is the fog which you see inside you the second you shut your eyes, fog that merges with the smoke emitted from the fires set on this planet of hatred and crime by millions of sick, human-apes—just like we see on the final track, “waiting for the fireman”. - Hisham Bustani, Jordan