by Senyawa vs Black To Comm 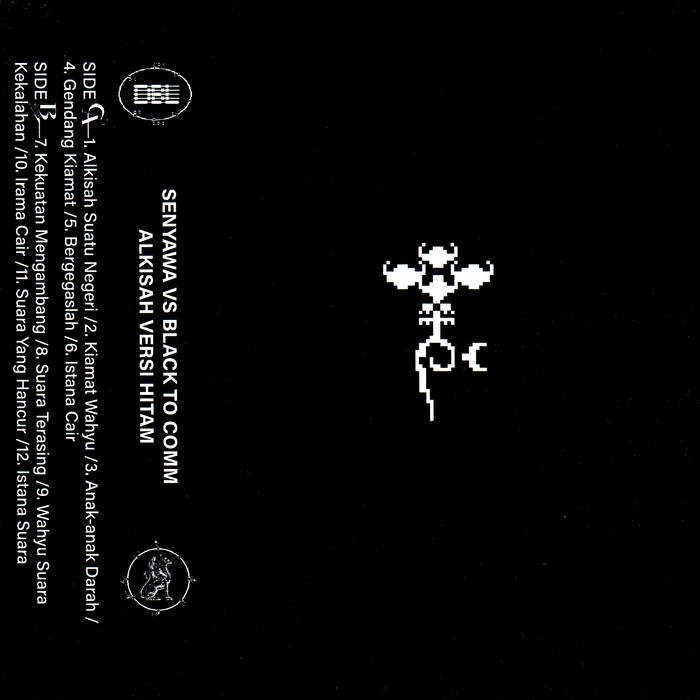 Alkisah Versi Hitam is a radical deconstruction and reimagination of Indonesian duo Senyawa's most recent album Alkisah by Hamburg's Marc Richter aka Black To Comm. The original album was released to critical acclaim in February of this year as a decentralized release on a multitude of labels from all corners of the world, Germany’s Dekorder and Jordan's Drowned By Locals being two of them. Richter is now completely reinventing the original album from scratch by doing an almost Teo Macero-level production job here, cutting up the originals and (re)constructing new material from scratch.

Released on LP by Dekorder, and on cassette by Drowned By Locals.

"Alkisah is a dizzying eight-song suite about the revolution that’s possible when world powers collapse, built into a fun house of prog-rock, noise, metal and a little traditional chanting." (New York Times)

"The Indonesian duo’s seventh album is a thrilling, at times ecstatic serenade to the collapse of civilization." (Pitchfork)

BLACK TO COMM is the moniker of Hamburg composer/musician Marc Richter who is creating intricate multi-layered collage based works for labels like Thrill Jockey, Type and Dekorder. His 2019 album "Seven Horses For Seven Kings" revealed an increasingly angry, transcendental and fearless approach, attaining new levels of urgency through noise, volume, rhythm, repetition, atonality and beauty.

Jogjakarta’s SENYAWA embody the aural elements of traditional Indonesian music whilst exploring the framework of experimental music practice, pushing the boundaries of both traditions. Their music strikes a perfect balance between their avant-garde influences and cultural heritage to create truly contemporary Indonesian new music. Their sound is comprised of Rully Shabara’s deft extended vocal techniques punctuating the frenetic sounds of instrument builder, Wukir Suryadi’s modern-primitive instrumentation. Inventions like his handcrafted ‘Bamboo Spear’; a thick stem of bamboo strung up with percussive strips of the animal skin along side steel strings. Amplified it fuses elements of traditional Indonesian instrumentation with garage guitar distortion. Sonically dynamic, the instrument can be rhythmically percussive on one side whilst being melodically bowed and plucked on the other.

Artwork by Somnath Bhatt.
Alkisah Versi Hitam is a co-release with Dekorder.
This tape edition is a release by Drowned By Locals.